The Varied Career of Akechi Mitsuhide

Akechi Mitsuhide is remembered first and foremost as the man whose betrayal caused the death of Oda Nobunaga. In retellings of the sengoku jidai, this single incident often overshadows the biography of its author. However, Mitsuhide’s story began overlapping with Nobunaga’s long before the fateful events of 1582. This is the story of his life in three main acts.

Mitsuhide was born in 1526 or 1528. His clan, the Akechi, was a branch of the Toki clan, which in turn claimed descent from the 9th century Emperor Seiwa.

After Saitō Dōsan overthrew the Toki to take control of Mino Province in the 1540s, the Akechi came to serve him directly. If popular history is to be believed, the teenaged Mitsuhide was groomed as a general by Dōsan and was even acquainted with his daughter Nōhime - the same daughter who would be married off to Oda Nobunaga in 1549 to cement peace between the Saitō and Oda clans. However, the Saitō clan fell apart when Dōsan’s own son Yoshitatsu rebelled against him in 1556. Yoshitatsu’s ambition would set his clan once again on the path to conflict with the Oda and within a decade, the Saitō would be virtually destroyed. 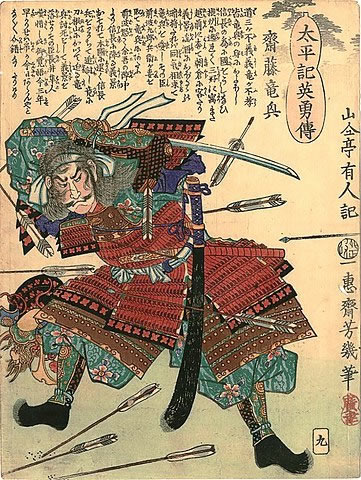 During the civil war of ‘56, Mitsuhide is supposed to have fought for Dōsan at the decisive Battle of Nagaragawa, in which the old daimyō was slain. To punish the Akechi for supporting his father, Yoshitatsu laid siege to and destroyed their historic home, Akechi Castle, which remains ruined to this day. Some accounts have Mitsuhide barely escaping the castle with his life; however, it is possible that this was a later embellishment. As with many events of the sengoku jidai, Edo-period fantasy fills the gaps in the historical record. In any case, it is accepted that Mitsuhide was effectively expelled from Mino from this point onwards. 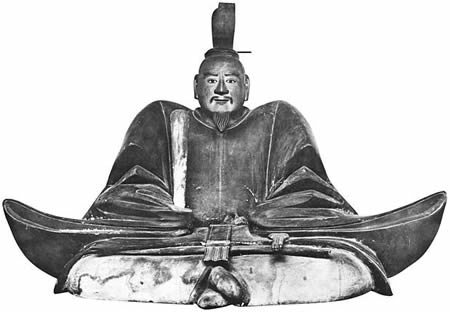 For a while, Mitsuhide took shelter in the service of other clans, settling under the Asakura of Echizen Province. There, in 1568, he would come into contact with the similarly exiled Ashikaga Yoshiaki, who was petitioning the Asakura daimyō for support in retaking the Shogunate after his brother’s death.

At close to 40 years of age, Mitsuhide saw his opportunity for glory and set himself up as an intermediary between Yoshiaki and Oda Nobunaga. Thanks to Nobunaga’s agreement to march on Kyoto, Yoshiaki was restored, at least temporarily, as shōgun.

Rise to Prominence Under Oda Nobunaga

Mitsuhide impressed Nobunaga with his defence of the newly installed shōgun against would-be attackers, and was accepted as a general in the Oda army. This shift of allegiance was a sensible move for Mitsuhide, as Yoshiaki and the ever more powerful Nobunaga were quickly falling out with each other.

Amongst other endeavours, Mitsuhide joined Nobunaga in leading the brutal Siege of Mount Hiei in 1571 and was subsequently rewarded with the lordship of Sakamoto. The castle he built there, protecting the approach to Kyoto along Lake Biwa’s western coast, was second only to Nobunaga’s grand Azuchi Castle on the lake’s eastern side. The northwest approach to Kyoto was also later entrusted to Mitsuhide, who built Kameyama Castle there as a base for subjugating the daimyō ofneighbouring Tanba Province. It was from here that he would launch his sudden coup against Nobunaga in 1582, having been ordered to march his army west in support of Hashiba Hideyoshi.

There is no doubt that Mitsuhide occupied a privileged position within the Oda military administration. Tales abound, however, of humiliations that he supposedly suffered as a result of Nobunaga’s temper. There is no knowing for certain which, if any, of these were true and which were invented to justify Mitsuhide’s sudden betrayal after the fact. We must admit that certain episodes portrayed in Edo-period art, such as Nobunaga striking Mitsuhide in front of other generals, would not have been entirely out of character for the Oda lord. 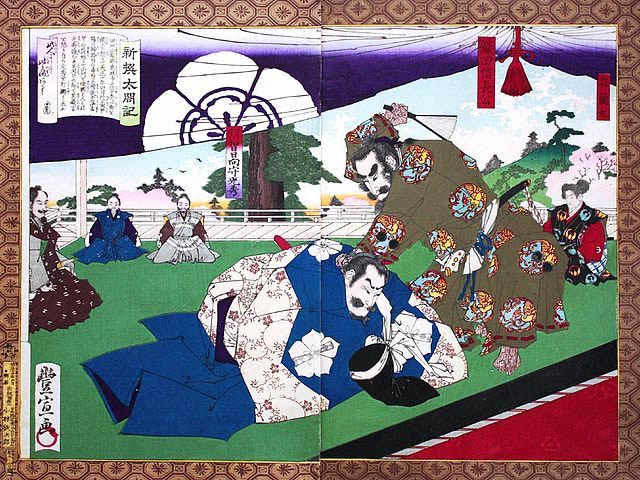 It is tempting to think that Mitsuhide’s tightening orbit on the Great Unifier would inevitably have resulted in a collision. But it remains unclear how we should interpret the final act of his career. Was he a principled hero taking a lone stand against tyranny? A paranoid elder general caught in an impulsive power grab? Or merely the fall guy in a conspiracy set in motion by rival daimyō, the Imperial court, or even a member of Nobunaga’s inner circle? While the truth may never be known, the mystery surrounding Mitsuhide’s true motives for rebellion will forever inspire drama and speculation.