The Rise of Oda Nobunaga

Oda Nobunaga’s captivating life story begins in Nagoya in 1534. Born the second son of a minor daimyō - officially, a shugodai or ‘deputy governor’ of southern Owari Province - Nobunaga would eventually go on to become known as Japan’s first Great Unifier. But the path to success would not be smooth. In this post, we will examine the dramatic incidents of Nobunaga’s early life and career up until the pivotal Battle of Okehazama in 1560. 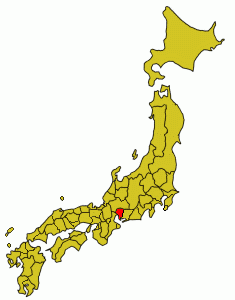 At around thirteen years of age, Nobunaga shed his childhood name of Kippōshi or Kichibōshi at a coming-of-age ceremony held at Furuwatari Castle, his father’s residence at the time. Not long afterwards, in 1547, he took part in his first brief military expedition with his mentor, the samurai, poet and diplomat Hirate Masahide at his side. During this period, Nobunaga’s father Nobuhide was campaigning against rival lords in Mikawa Province to the east and Mino Province to the north.

In 1548, Nobuhide struck an apparent coup against the Matsudaira clan of Mikawa. Seeking support against Nobuhide from the larger Imagawa clan, the Matsudaira daimyō had agreed to send his six-year-old son Takechiyo as a hostage to the Imagawa. Catching wind of this, Nobuhide managed to seize the boy en route. However, despite threatening to execute Takechiyo, Nobuhide failed to disrupt the hostile alliance. After suffering defeats on both fronts, Nobuhide was forced to come to a strategic truce with the Mino lord, Saitō Dōsan, in order to concentrate on this amplified threat from the east. 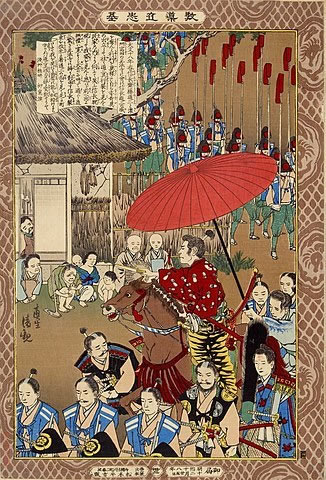 To cement the peace, Hirate Masahide brokered a marriage between Nobunaga and Saitō Dōsan’s daughter Nōhime, who was around the same age as Nobunaga. At the time, the renowned beauty Nōhime could hardly have considered the Oda youth a great catch. Although he is said to have excelled in his martial education, Nobunaga was better known for his outlandish dress sense and uncouthness, which had already earned him the nickname Owari no Ōutsuke (the Great Fool of Owari).

According to chronicles, Nobunaga went around in a sleeveless bathrobe and half-trousers with his sword and dagger thrust into a straw rope belt. With his hair tied up in a bun with coloured cords, he spent his time playing with Western firearms and consorting with commoners. He also had an indecorous habit of snacking on fruits and rice cakes as he swaggered about town. (Then as now, eating on the move was apparently not considered the height of manners).

The Deaths of Nobuhide and Masahide

The clan’s conflict with its eastern neighbours continued. Nobunaga’s elder brother Nobuhiro got into a scrape when his castle at Anjō was besieged by the Imagawa. He was allowed to escape with his life in exchange for the Oda’s release of their hostage Matsudaira Takechiyo, who finally passed into the hands of the Imagawa.

When Oda Nobuhide passed away from an illness, Nobunaga appeared at the grand funeral in his usual outfit rather than the expected formal attire of hakama (pleated trousers) and kataginu (wide-shouldered sleeveless cape). He caused further outrage among his family by throwing incense at the altar and storming out of the ceremony. The reasons for this behaviour are not entirely clear. We can speculate that as Nobuhide’s eldest legitimate son, Nobunaga might have expected to be handed the reins of the Oda clan instead of Nobuhiro, who despite being Nobunaga’s elder was disdained as the son of a consort.

Dismayed by Nobunaga’s arrogance and incivility, Hirate Masahide committed ritual suicide as a way of chastising his master. This outcome would reportedly haunt Nobunaga in later years.

After swiftly cleaning up his act, Nobunaga gained enough support within the clan to be installed in Nobuhiro’s place at its head. However, the matter was far from settled. Overlooked in his own clan’s line of succession, Nobunaga’s brother-in-law Saitō Yoshitatsu waged war against his own family in Mino, killing his father and brothers and making the province to the north once again hostile to the Oda. He began plotting with Nobuhiro to overthrow Nobunaga, but the conspiracy was quickly put to bed when Nobunaga confronted and pardoned his brother in a show of menacing benevolence.

It was not long before one of the younger Oda brothers, Nobuyuki, rose up in open rebellion. After being crushed at the battle of Inō in 1556, he promised to remain faithful to Nobunaga but instead began planning a second uprising. This time, Nobunaga, feigning illness, lured Nobuyuki to Kiyosu Castle (which he had seized earlier from a rebellious uncle) and had him assassinated.

With the Oda clan’s internal strife mostly settled, the end of the 1550s was dominated by conflict with the powerful Imagawa. It was in this period that Matsudaira Motoyasu (formerly known as Matsudaira Takechiyo) cut his teeth as a commander on the Imagawa side. But the Imagawa in fact had much loftier goals than the subjugation of Owari. In 1560, the daimyō Imagawa Yoshimoto led a huge force of 25,000 along the Tōkaidō (eastern sea route) towards Kyoto, where he intended to challenge the shōgun himself. Having crushed the Oda’s border defences, Yoshimoto expected little further resistance from Nobunaga en route to the capital and decided to set up camp near Okehazama, just outside Nagoya. 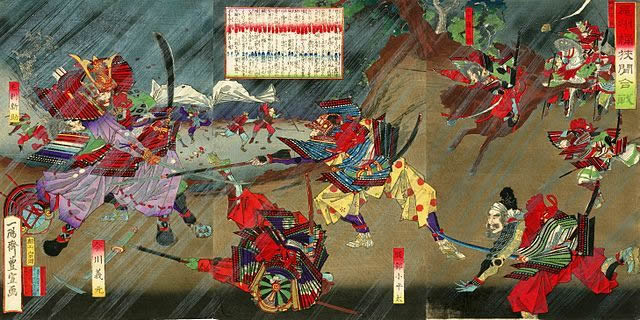 What followed has since become legend. Under cover of a summer thunderstorm, the vastly outnumbered Oda troops pulled off a daring manoeuvre that would change the course of Japanese history. Nobunaga’s attack would cost Yoshimoto his head and give the still teenaged Matsudaira Motoyasu the opportunity to cast off the Imagawa yoke for good. At 26 and already in the second half of his life, the Great Fool of Owari was finally on his way to the big time.